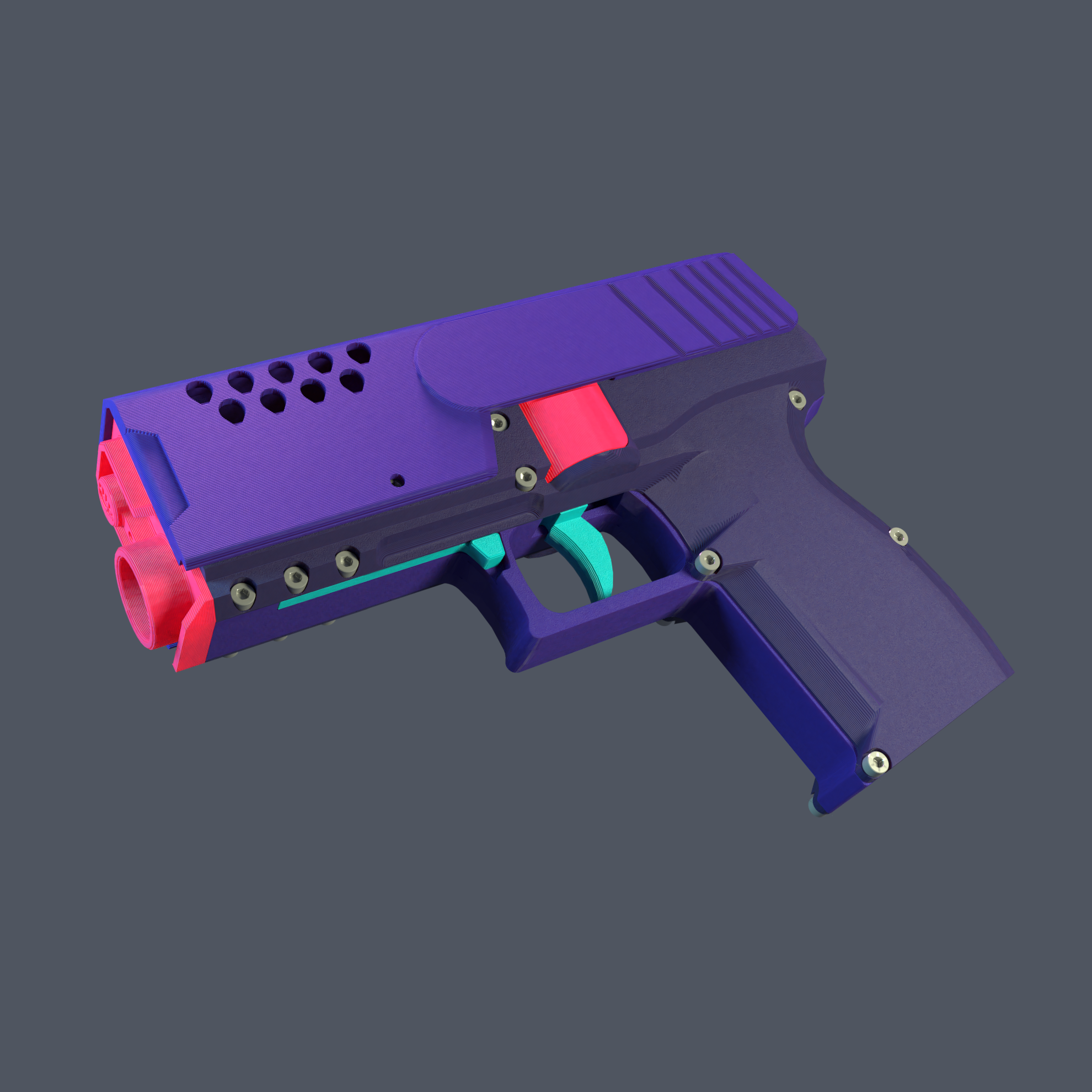 Despite a slow and tedious development and release, I feel like the concept pistol has been a success, with a total of 170+ orders containing either the fileset or developer kit. The mechanical design of the pistol is bold and I hope it left its mark when it comes to smart and efficient printed blaster mechanisms. There are quite a few things that i would fix or change if i were to redo the pistol, but also a lot that i now know works incredibly well.

The Concept Pistol was always meant to be a foundation for more, but throughout its release I noticed that I might not be the best candidate build upon it. Instead of drawing up cosmetic changes and minute upgrades, I want to focus my energy on developing something new. I have contemplated drafting up a “concept v2”, but i feel like for the most part, the mechanical principles that define the concept pistol name for me are limited. They are bold and innovative from a functionality perspective, but greatly hold back the blasters aesthetics.

That does not mean I will abandon the concept pistol, but I feel like others have already picked up the torch and what i have to offer is fairly limited in comparison. A perfect example for that is the C226 Skyline variation by my dear friend FlattenTheSkyline.

Learning from the concept pistol

How I would tackle the Concept Pistols problems

The single most troubling piece of the concept mechanism was the monolithic slide. While the moving slide makes the pistol more fun to use, it causes trouble with large batteries and can set off the rev switch when holstering the blaster. It is also notoriously harder to print than the remaining pieces due to its shallow overhangs and thin walls. On my next pistol design I would opt for a smaller moving piece sitting on the rear of the frame. That piece could be linked to, or directly serve as the pusher, while the battery compartment will get a dedicated cover.

The grip should be a monolithic design that can be printed upright on its base. only the trigger guard should be part of another frame component. The grip can connect to the frame with screws through its “beaver tail” and interlocking geometry in the front. A monolithic grip would solve magazine fitment issues and allow for a flanged magwell. The only drawback would be sacrificing the integrated flexure heel release, but it could make room for an ambidextrous thumb release. It would also make customizing the shape of the grip from a .STEP file much simpler.

What I’ll keep for future projects:

What else could be different?

Angled talon mags are here to stay and not making use of them would be ignorance at best. However I’m not yet ready to abandon my collection of standard talons and would love to realize a wildcard geometry accepting both types. If that is not feasible, different grip modules for each magazine type would be the way to go.

Changing the orientation of the flywheelcage so the flywheels and barrel sit near the top of the blaster would allow the magazine to sit 2-3cm deeper inside the blaster, but could limit the options for a pusher compatible with straight talons. In my opinion it is still worth trying.

The concept pistols look is quite blocky and strongly dictated by its sandwich style frame assembly and the monolithic slide that has to clear both the battery and flywheels. With a new design I’d want to explore different shapes and a less rectangular aestetic to offset the blaster from any real-steel counterpart and also make it more exiting to look at.